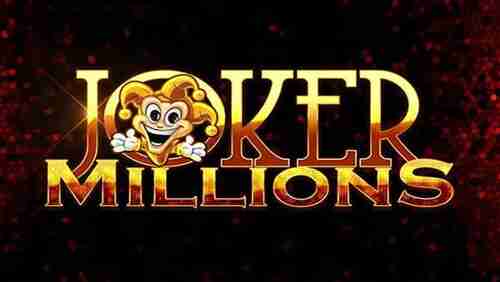 Joker Millions is an exciting slot game produced by Yggdrasil. Released on January 1st, 2015, this game boasts of interesting gameplay and outstanding graphics. If you're curious about what Joker Millions has to offer, you can try the free demo mode on clashofslots.com without any registration.

Before you start playing, it's important to know the game metrics. Joker Millions offers a 94.3% return to player (RTP) rate, high volatility, and the potential to win x2000 the maximum win. With its well-balanced math and possibility of significant swings, the game promises to be an exciting experience.

Joker Millions is a classic fruit slot that has a clean, simple design, with a focus on the gameplay experience. The game is set against a black and red background, with the reels framed in gold. The symbols in the game are traditional fruit machine symbols, including watermelons, bells, cherries, plums, oranges, and lemons, as well as the big red seven which is the highest paying symbol.

The graphics in Joker Millions are crisp and clean, with the symbols nicely rendered and easy to distinguish. The sound effects are appropriate for the game, with simple musical accompaniments and sound effects for wins and features. Overall, Joker Millions has a straightforward and classic look that is sure to appeal to those who enjoy traditional fruit slots.

Joker Millions is a high-volatility slot, meaning that the payouts are infrequent but significant when they do occur. The game's RTP (return to player) is 94.3%, which means that for every 100 coins wagered, on average 94.3 coins will be paid back to the player over time. This RTP is considered to be on the lower side for slots.

The Freeze and Respin function is triggered when three of the same symbols land on a payline, excluding the scatter. The symbols in the winning combination will be frozen in place, while the rest of the reels will respin. This sequence continues until no more symbols of the same kind land and the winnings are paid out.

The Column Multiplier feature adds an extra layer of excitement, as players can receive multipliers on their winnings. If the reels are stacked with the same symbol, each reel will apply a multiplier of x1 to any winning result. For example, if two reels are stacked with lemons, players receive a x2 multiplier. With the potential to stack every reel, players can receive up to a x5 modifier.

The Jackpot Spins feature is where players have the chance to win big. This feature is triggered when the Joker Symbol lands on each of the five reels. The five Joker Symbols will be frozen in place, and the reels will respin like the Freeze and Respin feature. The feature continues as long as new Joker Symbols land, and the reels keep spinning. The coin values are tallied up and paid out if no more Jokers land. Each Joker Symbol is worth up to 1,000 coins, and the best case scenario is landing all 15 Jokers in view, which results in the player winning the jackpot amount indicated above the reels.

With its fast and straightforward features and the possibility of big wins, Joker Millions is an exciting and enjoyable game for players who love classic fruit slots with a twist.

Based on our own experience with the game, Joker Millions is a highly entertaining fruit slot that offers a pleasing mix of traditional symbols and modern features. Ignoring the jackpot for a moment, the slot offers decent wins of up to 2,500 times the stake, which, while not life-changing, still provide a nice boost to players' bankrolls.

Joker Millions will appeal to a range of players. Those looking for a classic fruit slot with a modern twist will find value in the game, as will players who are looking for a simple, mid-level volatility slot. Of course, most players will be drawn to Joker Millions in the hopes of hitting the progressive jackpot, which, while not as well-known as some other jackpots, still holds the potential for massive payouts.

What is the RTP and volatility of Joker Millions?

Joker Millions is a highly volatility game with RTP of 96.4% which well below the average in the industry.

What is the max win in Joker Millions?

The max win in Joker Millions is the progressive jackpot. The exact amount varies depending on the number of players contributing to the jackpot, but it has the potential to reach massive amounts.

How does the progressive jackpot work in Joker Millions?

The progressive jackpot in Joker Millions is triggered when the player lands five Joker Symbols on the reels. The value of the jackpot increases with each player's wager, so the more players contributing, the higher the potential payout.

What are the special features in Joker Millions?

Joker Millions features a Freeze and Respin function, Column Multiplier, and Jackpot Spins. The Freeze and Respin function is triggered when three of the same symbols land on a payline, and the symbols in the winning combination are frozen in place while the other positions spin again. The Column Multiplier applies a multiplier to winning results if reels are stacked with the same symbol. The Jackpot Spins is triggered when five Joker Symbols land on the reels and the goal is to land as many Joker Symbols as possible for a potentially massive payout.

Is Joker Millions available on mobile?

Yes, Joker Millions is available on both desktop and mobile devices.

Is it possible to play Joker Millions for free?

Yes, you can play Joker Millions for free on our website. Try the game for yourself and see if you have what it takes to hit the progressive jackpot.

This Joker Millions review was authored by W.Bergstrom | Last updated on 05 February 2023.