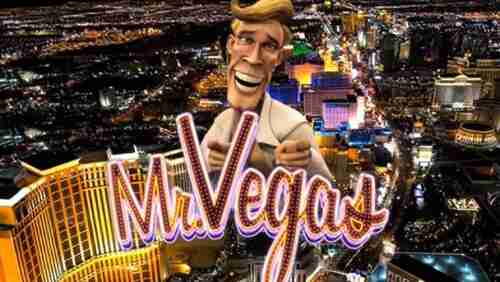 Come join Mr. Vegas on his adventures in the Las Vegas Strip with the Mr. Vegas slot game from Betsoft. This game features characters from the Las Vegas scene, like dancing girls, waiters, and dealers, and is played on a 5-reel, 3-row slot with 30 paylines. As you spin the reels, you'll uncover the secrets behind Mr. Vegas's winning streak. The game boasts high-quality graphics and smooth animations, giving you a true Las Vegas experience. Whether you're a seasoned slot player or just starting out in online gaming, you'll enjoy the thrill of the Mr. Vegas slot game.

Mr. Vegas is a fun and flashy slot game set in Las Vegas, created by Betsoft Gaming. Symbols in the game include showgirls, dice, roulette wheels, and the main character, Mr. Vegas. There's also a mini-slot bonus round where you can spin a smaller set of reels within the main game for extra prizes.

One of the best things about the Mr. Vegas slot game is its impressive graphics and animation. The game is designed to look like a real Las Vegas casino, with realistic 3D symbols and smooth animations. It also has a catchy soundtrack that enhances the exciting atmosphere of the game.

Mr. Vegas is a 5-reel slot game with 30 paylines that allows players to choose their bet size and the number of paylines they want to activate. It's suitable for players with different budgets and has special features that can help players win big. For example, the "Vegas Bonus" symbol can trigger a mini-slot bonus round, and the "Mr. Vegas" symbol is wild and can substitute for other symbols to create winning combinations.

To play the game, players select their bet size and number of paylines using the "Bet Per Line" button and "Max Bet" button. Then, they spin the reels by clicking the "Spin" button. If they get a winning combination, they'll be paid according to the paytable. Landing the "Vegas Bonus" symbol on the middle reel will activate the mini-slot bonus round where players can spin a smaller set of reels for extra prizes.

In the Mr. Vegas slot game, you can win by landing matching symbols on a payline. The game has 5 reels and 30 paylines, and you can choose your bet size and the number of paylines you want to activate. The paytable shows the different winning combinations and the payouts for each one. To play, simply select your bet size and number of paylines, then spin the reels and see if you get a winning combination.

The Mr. Vegas slot game has special features that can help players win big. The "Mr. Vegas" symbol is wild and can substitute for other symbols to create winning combinations, and the "Vegas Bonus" symbol triggers a mini-slot bonus round where players can spin a smaller set of reels for additional prizes. The mini-slot game has its own paytable and wild symbol to help create winning combinations.

There's also a "Double Up" feature that lets players try to double their winnings by correctly guessing the outcome of a coin toss. To use it, players need to have won a prize in the base game and then click the "Double Up" button. They can choose to guess the outcome of the coin toss or collect their winnings and return to the base game. If they guess correctly, they'll double their prize; if they guess incorrectly, they'll lose their prize. The "Double Up" feature is optional and can be used after every winning spin.

The Mr. Vegas slot game is a popular choice for online players due to its exciting gameplay and immersive Las Vegas theme. The game features flashy graphics and special features like a wild symbol, mini-slot bonus round, and "Double Up" option that gives players the chance to potentially double their winnings. With its unique elements and the convenience of being able to play from home, it's easy to see why Mr. Vegas has become a fan favorite among online slot players.

What is the Mr. Vegas slot game?

Mr. Vegas is a popular online slot game that was developed by Betsoft Gaming. The game features a fun and flashy Las Vegas theme, with symbols that include showgirls, dice, roulette wheels, and Mr. Vegas himself.

How do you play the Mr. Vegas slot game?

To play the Mr. Vegas slot game, players first need to select their bet size and the number of paylines they want to activate. Then, they can spin the reels by clicking on the "Spin" button. The game will then spin the reels and any winning combinations will be paid out according to the paytable.

What special features does the Mr. Vegas slot game have?

The Mr. Vegas slot game has a number of special features that can help players win big. For example, the "Mr. Vegas" symbol is wild and can substitute for other symbols to create winning combinations. The game also has a "Vegas Bonus" symbol that can trigger the mini-slot bonus round, where players can spin a smaller set of reels to win additional prizes.

Yes, the Mr. Vegas slot game is fair. The game uses a random number generator (RNG) to determine the outcome of each spin, ensuring that the results are completely random and fair.

This Mr. Vegas review was authored by W.Bergstrom | Last updated on 03 January 2023.