Play Empty the Bank by Pragmatic Play for Free 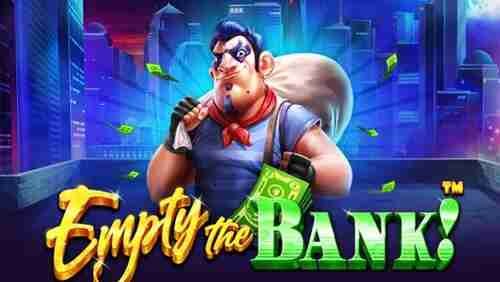 Empty the Bank is an online slot provided by Pragmatic Play. It has an average RTP of 96.48%. It is played on 5 reels with robbery themes and has 20 paylines. And if you manage to crack the main vault, you can "empty the bank" and instantly win 10,000 times your bet.

Empty the Bank is kept quite conservative with 5 reels and 20 fixed paylines. You follow the thieving bandit on his robbery adventures and have the chance to win up to 10,000x your bet. The impressive graphics and thematic music make for a well-rounded gaming experience.

You can play the free demo of Empty the Bank here at Gamblr to experience it for yourself.

The base game of Empty the Bank slot features five reels, four rows and twenty fixed paylines. Form winning combinations by landing three, four or five matching symbols on a payline, starting with the leftmost reel. You can bet between 0.20 and 100 per spin. Adjust the bet using the + and - buttons next to the spin button. You can configure the paytable to display payouts in both coin and cash values.

The theme of the game is a bank and we accompany a cunning thief in a massive heist that can pay up to 10000 times the stake. We see many skyscrapers in the background of the reels and the moon shines brightly where the slot is located on a rooftop. Empty the Bank is a wonderful choice if you are looking for mobile online slots, because it was designed to be played on notepads, desktops and mobile devices. When you get three or more symbols of the same type on adjacent reels, starting from the far left, a winning combination is created.

The RTP for Empty the Bank is 96.48 percent, which is slightly higher than the industry average. As with many slots from Pragmatic Play, this is a high variance slot. On a scale of 1 to 5, we would rate the volatility as 5. The maximum payout is 10,000 times your total bet in this game.

The minimum bet on this online slot is 0.20 per spin, while the maximum bet is 100 per spin. You can also place an ante bet equal to 25% of your standard bet. This increases the chances that the main bonus feature will be launched. To change the bet, click on the plus or minus button next to the spin button. You will then see three controls that allow you to change the amount of your bet. To place the ante bet, click the button to the left of the reels.

Empty the Bank has another big bonus feature in addition to the three bonus features. However, this is a streak respin-like bonus that has a lot of potential. You can win up to 10,000 times your stake.

To activate the Empty the Bank Respin feature, land the bonus symbols on reels 1, 3 and 5 during the same spin. They then enter a bank vault, which consists of a 7-square grid. Initially, only the middle 54 positions are available to unlock.

Three money symbols are inserted into the positions occupied by the triggering bonus symbols. You then play three respins. If any of the following special symbols appear, they award a cash prize or multiplier and remain for the rest of the round. In addition, the respins are reset to three. The symbols all award the following:

When all respins are used up, the cash values are added together to determine your final payout. Finally, and only in certain territories (but not in the UK), you have the option to buy the feature directly for an 80x multiplier of your total bet. This is known as the 'buy' feature.

You can increase your bet from twenty to twenty-five coins per spin and activate the feature Ante Bet. For example, a standard bet of €1 per spin becomes a bet of €1.25. In turn, your chances of activating the Respin feature are increased by double.

Empty the Bank is a slot machine that is definitely worth playing for several reasons. The bonus game is one of the best we have ever seen. It offers excitement and wins in equal measure, and the game looks great as well. On top of that, this game has a top prize that can go up to $1,000,000, which is not the case with many other non-progressive slots.

This game is suitable for just about anyone. New slot players will be pleased that there are not an excessive number of bonus features, but more experienced players will love the fact that the bonus game offers something different. It is also an excellent slot for those who are simply looking for a higher chance of winning, as the RTP is above average.

What is the RTP and volatility of Empty the Bank video slot?

The RTP of a slot machine indicates what percentage of money a slot pays back on average and is calculated over millions of spins. Volatility is a term that describes how regularly a slot machine pays out - the higher the volatility, the more irregular the payouts, but the bigger they can be when they do arrive.

No. Empty the Bank is a slot without free spins, but it has a pretty exciting respins round filled with modifiers and additional features.

Are there any modifiers in the base game of Empty the Bank?

No, the base game does not have any modifiers. However, the bonus round brings 8 different modifying symbols.

Where can I play Empty the Bank slot machine?

Can I play Empty the Bank online slot on my mobile device?

Sure. All you have to do is download the slot from any browser or casino app and you can play it on the go on any iOS and Android mobile device.

This Empty the Bank review was authored by W.Bergstrom | Last updated on 27 February 2022.